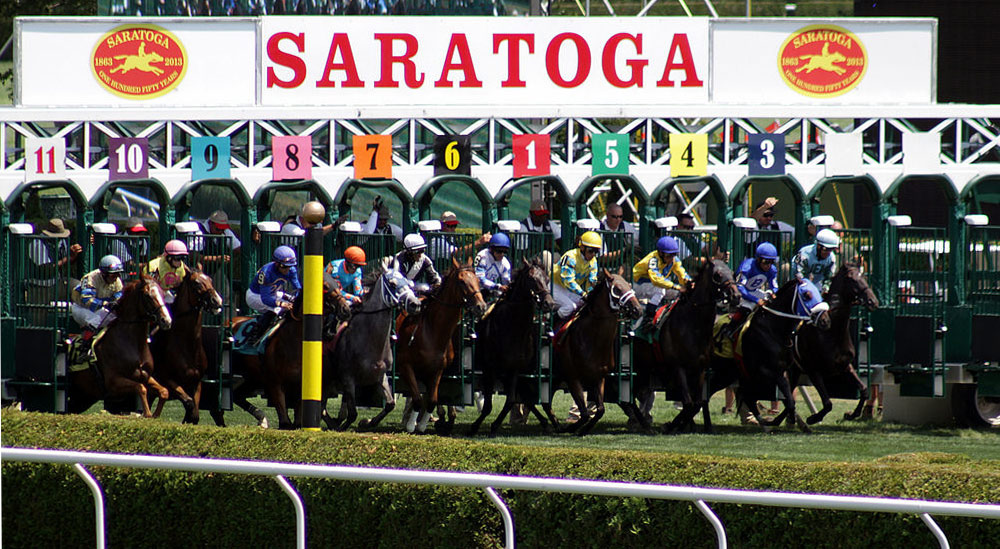 This weekend will feature 2 more Breeder’s Cup “Win and You’re In” races. The Breeder’s Cup will take place on November 5th and 6th at Del Mar Race Course.

The Jockey Club Gold Cup will take place at 10 furlongs on the dirt and is one of the Breeder’s Cup “Win and You’re In” races on the card. Current probables show the races as being divided into 2 tiers with horses like By My Standards, Happy Saver, and Max Player coming out of graded stakes races. The rest of the probables are exiting with less than impressive finishes in restricted stakes company or wins in low level allowance races.

The other “Win and You’re In” race for the Breeder’s Cup is the Flower Bowl Invitational which currently lists 8 probable runners. Among them are the top 2 finishers in the Grade 2 Glens Falls. War Like Goddess beat My Sister Nat in that event and the two look to renew their rivalry here.

Bill Mott’s talented Obligatory may return here after a disappointing 5th in the Grade 1 Test. She will likely have another rival from the Test joining her as Souper Sensational took 2nd in the same event.

A number of other last out runners up could also be set to run here. Ova charged (Grade 3 Victory Ride), Summer Brew (Niagra), Amendment Nineteen (Allowance), and Edie Meeny Miny Mo (Grade 3 Monmouth Oaks) all filled out the exacta in their last races.

After breaking her maiden last out at Parx, Oxana looks to enter this division with a bang. Rounding out the probable runners is Blue Sparkler winner Cilla out of California Chrome.

The Grade 3 Saranac Stakes is for 3 year old males on the turf. The race lists only 7 probables, but 6 of the 7 have hit the board in stakes races at some point in their career. Only Mohs, who is still a maiden, has not.

The Grade 2 National Museum of Racing Hall of Fame has three potential runners returning to this race. Public Sector for Chad Brown and Klaravich Stables won that race. Runner up Annex for Bill Mott and 7th place finisher Original are also probable for the race.

Wesley Ward will send out Like the King here after a runner up finish in the Grade 3 Kent Stakes. Founder for Chad Brown and He’spuregold for Kelly Breen are also listed as probables after wins in ungraded stakes races.

A common theme at Saratoga is the prestige of the baby races. As 2 year olds start to hit the middle of their first campaign the precocious ones are starting to establish themselves as the early leaders in the division. The winners of these major two year old stakes races can have major implications on the Breeder’s Cup Juvenile division as well as the Eclipse award voting at year’s end.

The Grade 1 Spinaway is for 2 year old females on dirt and is run as a middle sprint at 7 furlongs. All but two of the entries come off a win in their previous start. Echo Zulu broke her maiden at Saratoga for Steve Asmussen last time and will take the first jump into stakes company here. Joining her in their first tries against winners will be Benbang, Sequist, Dream Lith, and Sue Ellen Mishkin.

The three remaining probables come out of graded stakes efforts. Microbiome for Tom Amoss was 5th in the Grade 2 Adirondack Stakes where she finished behind third place runner Saucy Lady T who is also slated to appear in this race. Pretty Birdie comes in as the most accomplished runner in the field. The Norm Casse trainee was last seen with a victorious effort in the Grade 3 Schuylerville.

As Del Mar enters the home stretch of the summer meet they will feature 3 stakes races over the weekend.

The Grade 2 Del Mar Derby is for 3 year old males. The race will likely be headlined by Zoffarelli for Jeff Mullins who last won a Grade 3 in the La Jolla Stakes. Other last out winners headed for this spot appear to be None Above the Law (Real Good Deal Stakes), Crew Dragon (Allowance Optional Claiming), and Jimmy Blue Jeans (Snow Chief Stakes).

Hockey Dad for Doug O’Neill will go here as well and is looking to make his first breakthrough in the graded stakes ranks. Flashiest finished 11th in the Grade 1 Saratoga Derby and will get a much easier group to run against in this spot.

Finally, Sword Zoro and No Foolery Here are listed for the race. Both runners took 3rd in stakes in their last run. The former lost to Zoffarelli in the La Jolla Stakes while the latter came up short in the Oceanside Stakes.

As of the writing of this article only 5 horses were listed for this race. Often these probables will change as racing secretaries look to drum up other possible contenders to join the fray.

As it currently stands Richard Mandella is slated to have two runners here in Tap Water and Dogtag. Joining those two will be She’s Our Charm, and Avenue De France. All four of these runners hit the trifecta in their last races.

The final probable runner is Richard Baltas’ runner Bodhicitta. Although the horse took 4th last time out it was against Grade 2 horses in the Yellow Ribbon Handicap.

Much like the Spinaway at Saratoga, the Grade 1 Del Mar Debutante will be run at 7 furlongs and will feature some of the west coast’s most precocious two year old runners.

Elm Drive and Eda both exit the Grade 2 Sorrento Stakes where they finished 1-2. Also in the starting gate will be several horses fresh off of breaking their maidens including Ain’t Easy, Dance To The Music, Grace Adler, Myfavoritedaughter, and Rock The Belles. At The Spa is also scheduled for a run here after winning the CTBA Stakes.

The field also currently has one maiden listed as probable. Very Scary for Doug O’Neill will try to get her first career win in this spot.

Daily Horse Picks Has You Covered

Looking to play at Saratoga and Del Mar this weekend? Daily Horse Picks offers several premium packages that give you access to several different handicapping tools. Harness the power of machine learning to enhance your wagering. Packages can be found by visiting www.dailyhorsepicks.com/buy.