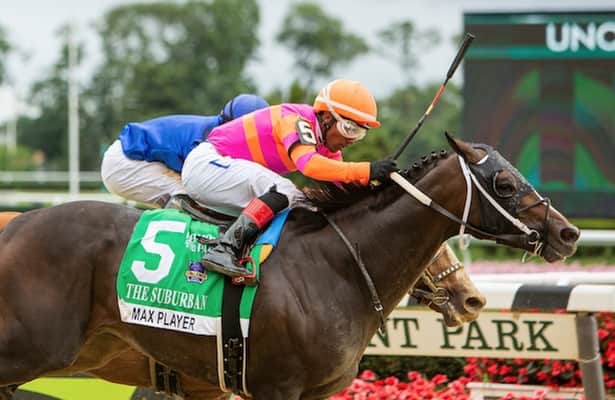 The 2021 Suburban by most accounts was a 2 horse race. Happy Saver is trained by Todd Pletcher and entered the race undefeated. Mystic Guide was a highly touted Godolphin runner who was coming off in the grade 1 Dubai World Cup.

As the horses left the gate, Mystic Guide had earned favoritism at odds of 4-5. Happy Saver went off at 8-5. No other horse was inside of 6-1.

Right off the jump Moretti popped out to a 2 length lead. Max Player sat off the pace in 2nd outside of the #1. Mystic Guide and Happy Saver sat back another 1 ½ lengths. Bringing up the rear in the early stages were Informative and Prioritize.

Typically the leader of the race will move down to the rail into the turn on onto the backstretch in order to save ground, lessening the total length of the race for their horse. However, as the horses exited the 1st turn, the television coverage cut to a head on shot which showed the top 4 horses at least 5 or 6 paths out from the inside of the track. The only two horses on the inside were the two trailers.

Rounding into the sweeping far turn at Belmont the order of the race had remained unchanged though the second flight had pushed closer to Moretti who set extremely moderate fractions through the first half mile. The horses had pressed into the rail slightly, but there were still 3 or 4 paths open to the inside as they entered the turn.

In the lane Saez did everything he could to get Mystic Guide off the rail and found himself eye to eye with a hard charging Max Player. The horses bobbed back and forth to the wire with Max Player getting the better of Mystic Guide in the end. Happy Saver was able to charge passed Moretti to round out the trifecta. Neither Informative or Prioritize were ever able to advance in the race and finished as also rans.

While Max Player claimed the victory on this day, there is pretty compelling anecdotal evidence that Mystic Guide is the horse you would want to bet should this field meet again. The Belmont Park track had been hammered with rain all weekend long and the track was listed as sloppy for the race.

Throughout the weekend cards horses that were more forwardly placed were having far greater success than their competitors deeper in the pack. The difficulty in making up ground can be seen in the fact that Moretti was the only horse to lose position in the race. The 2nd, 3rd and 4th runners at the start finished 1st, 2nd, and 3rd respectively.

Moving on the Turn

Along with pace dynamics in the slop, Mystic Guide had to overcome the most challenging trip of the top 4 finishers en route to a narrow defeat. As was previously stated, the jockeys were clearly avoiding the inside parts of the race track throughout the race. This is usually because the banking off the race track causes water to run down to the inside and pool along the rail which makes it a far more tiring path for a horse to take.

With Max Player sitting just off Moretti’s flank into the final turn, Mystic Guide ended up having to run into the deepest part of the track. Making matters worse was the fact that Moretti’s jockey identified the move and was squeezing the hole, this meant Saez had to make a move on the turn, which is typically unsuccessful at Belmont. He also had to fight off the leading horse as he squeezed through.

Once in the stretch Saez had to cover even more ground to get the horse back out into the middle of the track while Max Player stayed in the clear and got to run a straight line to the finish. In the end the difference between Max Player and Mystic Guide was a neck. It seems reasonable, or at least possible, that if the trips were reversed Mystic Guide would have won this race easily.

Notable Performances from the Weekend

This weekend featured a ton of competitive racing action from around the country. Perhaps the most impressive performance was put on by Brad Cox trainee Knicks Go who romped in wire to wire fashion. The victory came in the Grade 3 Cornhusker at Prairie Meadows Racetrack and Casino in Altoona, IA.

Notable Speed Figures From the Weekend