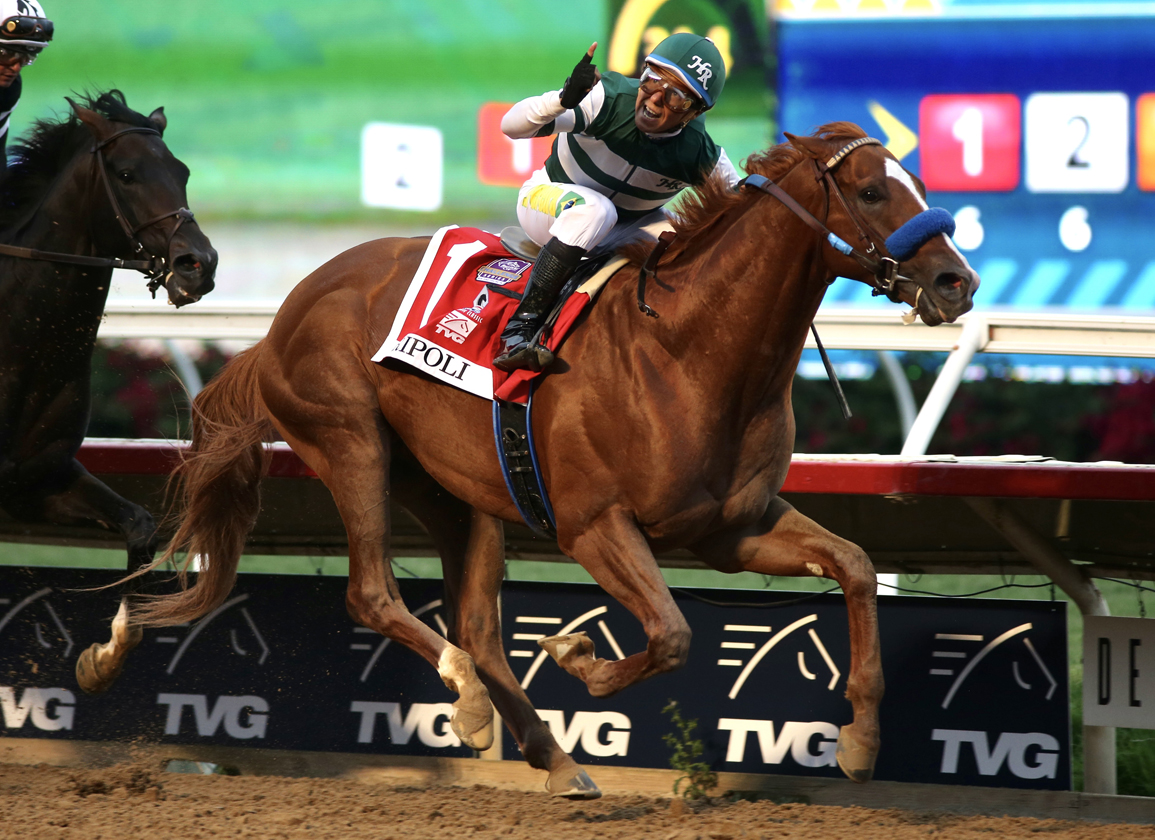 This weekend had plenty of graded stakes action from Del Mar, Saratoga, Monmouth, and Woodbine. Many of the races will have an impact on the Breeder’s Cup at year’s end.

Early speed held in the Grade 1 TVG Pacific Classic. The “Win and You’re In” to the Breeder’s Cup Classic saw the first and third place runners from the gate finish 1 and 2. In the end it was Tripoli at 6-1 for Hronis racing that was able to take over Myracehorse.com’s Tizamagician in the stretch. The top 3 choices in the board had little impact on the final outcome of the race finishing a late running 3rd (Dr. Post), 6th (Express Train), and 7th (Royal Ship).

The upset was on in the Grade 2 Del Mar Handicap. Astronaut, for John Shirreffs won paying $50 on $2. The winning jockey was Victor Espinoza who famously rode American Pharaoh to the first Triple Crown in nearly 4 decades. Astronaut received a 97 Beyer Speed Figure for the run.

Fans of American turf racing could have likely boxed this trifecta without even looking at the horses. That is because the top 3 finishers were ridden by three of the top turf jockeys in the country. Going Global got the victory under Flavien Prat. In second was Closing Remarks ridden by Umberto Rispoli. The east coast jockey colony was also represented when Joel Rosario secured third aboard Fluffy Socks for Chad Brown.

The Del Mar Mile Stakes was extremely formful with Mo Forza getting the victory and earning a 103 Beyer Speed Figure. Smooth Like Straight who was the other likely winner settled for 2nd earning a 102. Rounding out the trifecta was Hit the Road for Dan Blacker.

Bob Baffert found his way to the winner’s circle with the heavily bet Private Mission in the Grade 3 Torrey Pines Stakes. The race for three year old fillies saw the winner earn a respectable 86 Beyer Speed Figure, but it seems as though this might have been a light spot. The 2nd place finisher earned a 75.

Last time out the heavily favored Malathaat lost narrowly to Maracuja. The two met again here and the Godolphin filly showed her superiority. Sitting off a quick pace in the middle of the pack Malathaat didn’t have to do the dirty work of setting the pace as she did in her last race. When she was asked to respond exiting the far turn, she did so with aplomb and left no doubt that she was best in this race, avenging her only career loss.

Maracuja, who stormed past her in late July, finished dead last.

The Lake Placid Stakes was one of the few turf races that actually got to run on grass this weekend. With fairly consistent rain from the nearby tropical storm Henri most turf events were moved to the dirt. The result was formful with Chad Brown’s Technical Analysis beating out Runaway Rumour and Ego Trip to earn the Grade 2 victory.

Shug McHaughey is as patient as they come with his horses. Race favorite Code of Honor hadn’t seen the race track since January of this year. That didn’t stop the Gulfstream shipper from taking home the Grade 3 Philip H. Iselin Stakes. The horse’s freshness was evident by the fact that he pulled away in deep stretch and was in hand under the wire. The horse ran an impressive 105 Beyer Speed Figure off of the layoff.

Irad Ortiz Jr. proved he can be dominant on an international scale. The New York and Florida based jockey took his tack north of the border and won Woodbine’s Queen's Plate on Sunday. He was aboard the favorite, Safe Conduct. Throughout the early stages of the race he sat just in behind Take a Chance who was 28-1. At the mile mark, Safe Conduct took over and never looked back. The taxing opening fractions of the race caused the pace setter to go from 1st to last in just half of a mile.

Silent Poet was nearly 10-1 in the Grade 1 Highlander Stakes on turf. Stein perfectly guided the winner to a stalk and pounce trip over taking leader Caravel in the late stages for the victory.

The Grade 2 Dance Smartly Stakes was won by Mutamakina for Christophe Clement under the handling of Dylan Davis. Etoile for Chad Brown finished 2nd.

In the Grade 3 Ontario Colleen Stakes Our Flash Drive got the win for Mark Casse who has dominated the Woodbine meet for years. The horse was ridden to victory by local jockey Patrick Husbands.

On Saturday Corelli won the Grade 3 Singspiel Stakes for Jonathon Thomas. In the other Grade 3 of the day Boardroom took down the Seaway Stakes.