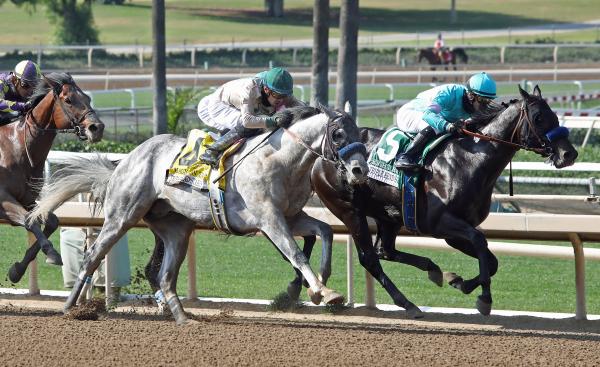 It was a busy weekend of racing action in the United States, with graded action taking place on Friday, Saturday, and Sunday. The graded action continues on Monday with the Steve Sexton Mile and Gamely Stakes. However, we will run through the outcomes of those races tomorrow. Instead, today we will focus on the winners of the graded races from this past weekend.

The biggest graded race of the weekend came in the form of the Grade 2 Triple Bend Stakes at Santa Anita. There was a purse of $200,000 up for grabs in the race, which was won by Magic On Tap.
The five-year-old finished two lengths clear of Shooters Shoot to win the illustrious race, as he finished in a time of 1:23.54. Bob Baffert trains this horse, and he has now recorded two wins in three runs. However, it was a first graded victory after previously coming fourth in the Grade 2 Californian Stakes in the middle of April.

It was also a first Graded win for Award Winner in the Grade 2 Charles Whittingham Stakes at Santa Anita on Saturday. The five-year-old produced an excellent display to hold off Red King and Acclimate, who finished in third and second, respectively. Award Winner finished the race in a time of 1:59.27 and was the first win for connections since an allowance race in December 2018.
It was only his third run in graded company after he had previously finished second in the Grade 3 Kent and sixth in the Grade 2 National Museum of Racing Hall of Fame.

Just a week before the Belmont Stakes takes place, there was graded action at Belmont Park this past weekend. It was a memorable afternoon for Sainthood, as the three-year-old won the Grade 3 Pennine Ridge Stakes by a length from The Reds.
The first two home were well clear of the field, as Shawdyshawdyshawdy was back in third, five lengths behind The Reds. Sainthood won the coveted Grade 3 in a time of 1:50.57, and it will be interesting to see what’s next for this talented three-year-old after this impressive outing.

Gam’s Mission also produced a stirring display in one of the featured races at Churchill Downs this past weekend, as the filly won the Regret Stakes in a time of 1:51.02.
The three-year-old battled strongly to claim the victory as she finished just three-quarters of a length clear of Spanish Loveaffair. It was a tight finish in the Grade 3, as Flown was also ahead further back from the horse that finished in second.

All the attention ahead of the Matt Winn Stakes was on O Besos and Helium, who were both making their return to the track for the first time after the Kentucky Derby. However, they were upstaged by Fulsome in a competitive renewal of the Grade 3. Fulsome looked the sharper of the three horses down the final stretch as the Brad Cox-trained horse eventually finished three and a quarter lengths clear of the Triple Crown hopefuls.

The oldest graded winner of the day came in the form of eight-year-old Bombard, who finished a length and a quarter clear of Majestic Eagle to win the Grade 3 Daytona Stakes at Santa Anita. Majestic Eagle did look primed for a strong run towards the line, but he was well held off by the eventual winner. French-bred contender Commander finished back in third.

There was a resurgent performance from Kenneth McPeek-trained Crazy Beautiful on Sunday afternoon at Santa Anita, as the three-year-old returned to the track to win the Summertime Oaks. She finished the race a length and three-quarters clear of Soothsay, while Lady Aces was only able to finish in third. It was the response that connections would have been hoping for, as she finished in a disappointing tenth in the Kentucky Oaks at the end of last month.
Keep up with your latest horse racing news and betting pick previews at Daily Horse Picks.