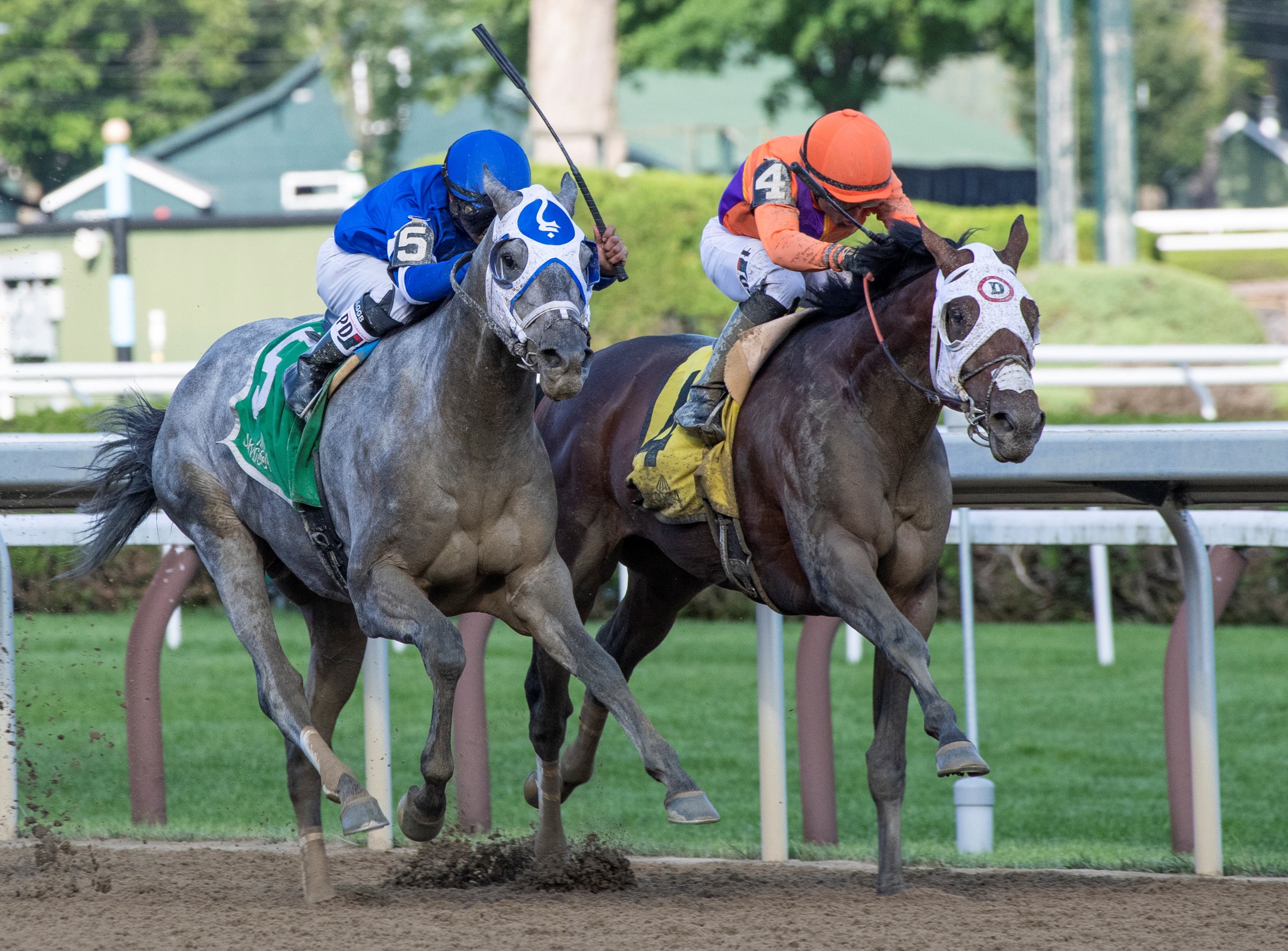 The main event this weekend was the Grade 2 Jim Dandy at Saratoga. It marked the return to the races for Essential Quality who was last seen winning the Belmont Stakes. Joining him in the starting gate were four rivals following the scratch of Risk Taking.

With the defection, Saratoga’s leading jockey Luis Saez had the favorite in the outside post. As the gates opened the start was about as perfect as they came and the horses started in a 5 wide scramble for the lead. With none of the horses taking back early, Essential Quality was wide entering the first turn. Notably his only loss in the Kentucky Derby where he got hung wide and covered more ground than any of his rivals.

Into the far turn Saez made a decision to let the pace develop ahead of him and began to rate the horse behind the leaders. Matching this move was Keepmeinmind who stayed well off the rail and kept Essential Quality wide.

The longest shot on the board Dr. Jack led as the horses headed up the back stretch. Weyburn and Masqueparade flanked him in 2nd and 3rd. Essential Quality dropped to last though never lost touch with the field. Throughout the run, there was never more than 6 lengths between the first and last place horse.

In the final strides of the back stretch Saez began to ask the champ to begin engaging, pulling just ahead of Keepmeinmind and closing the gap on the front trio.

As Essential Quality began to make his move, so too did a number of the runners and it looked for a moment that the Brad Cox trainee may be yet another victim of the “Graveyard of Champions.” However, after taking a few strides to get up to speed, Essential Quality started gobbling up rivals following a move made by Weyburn.

Dr. Jack who had led throughout showed he just isn’t at this level as he began to lose ground rapidly to the rest of the field. While he started the turn in 1st by a length, he entered the stretch dead last by several lengths.

As the horses turned for home it was everything racing fans could have asked for. Four horses fanned into the lane on relatively equal terms each with a s shot to win. Keepmeinmind had saved ground and gotten through on the inside. To his outside Masqueparade sat in the three path and looked extremely dangerous. The 5th path was occupied by Weyburn who, like Essential Quality in about the 6th path, had been wide all the way.

At the 3/16ths pole Weyburn threw in the towel and the remaining three contenders drew in toward one another. Essential Quality quickly appeared to put away Masqueparade who was in between horses. From there it was a one furlong dash between Essential Quality and Keepmeinmind.

In the end, the champ’s heart and/or talent proved to be too much and he prevailed, leaving the Kentucky Derby as his only loss to date. The win should keep everything on track for Cox’s plan of running the Godolphin colt in the Travers as his final prep before the Breeder’s Cup Classic at the end of the year.

In the end the final margin of victory won’t look that impressive, but Essential Quality’s performance was that of a true champion. Trakus uses GPS to determine ground loss of horses in a race. According to their numbers, Essential Quality ran the equivalent of 4 extra lengths as compared to Keepmeinmind. In theory if the trips were flipped Essential Quality would have run the race about a second faster than any of his rivals.

The performance of the weekend may have been turned in by Jackie’s Warrior who proved his supremacy in the Grade 2 Amsterdam. After a lengthy weather delay the horses hit the sloppy track. Drain the Clock who had previously beaten Jackie’s Warrior pushed him for the lead, but after running an insane 21 2/5ths seconds to the quarter mile, Drain the Clock backed out.

With a lone lead and with little encouragement from the jockey, Jackie’s Warrior posted the half mile in 43 4/5ths while widening his margin. In the end Jackie’s Warrior won by 7 ¼ lengths without a single use of the crop.

Lexitonian pulled a major upset at 34-1 taking the Grade 1 Vanderbilt under Jose Lezcano. Typically when a big long shot wins a race it is a matter of absurd pace scenarios such as getting to be lone speed or closing into a collapsing pace. However, Lexitonian won in impressive fashion, getting to the lead and conceding at the 2nd call before kicking back on for victory.

Horse racing is a streaky game. Jockeys, trainers, and horses will run hot and cold. In the Grade 2 Bowling Green two of the hottest connections at Saratoga paired up for an easy victory. Mike Maker has been firing with absolutely everything this meet. He is especially good at training horses for turf routes. That would have made Cross Border an almost automatic inclusion on tickets. Combine that with his meet leading 12 wins and it was borderline insanity to leave this horse off.

Not to be forgotten was the fact that Cross Border also got Luis Saez in the saddle who is the meet’s leading rider. All of this was the recipe for stalk and pounce victory where he proved to be much the best.

When it comes to racing in California, few jockeys ride the circuit better than Flavien Prat. The jockey rode Dr. Schivel to a Grade 1 win as the second choice behind CZ Rocket who would finish third after closing a lot of ground coming into the stretch.

Shedaresthedevil sat off of front running Venetian Harbor through the early part of the race. Turning for home, Florent Geroux took the Brad Cox trainee by the leader and Paige Anne who took 2nd only briefly. In the closing moments of the race Shedaresthedevil extended her lead to win by over 4.

Leader of the Band was steadied at the start, but was undeterred. In the lane she fanned out and blew by the competition, opening up late for a 2 length victory at the wire. The John Servis trainee was ridden to the winner’s circle by Frankie Pennignton.

The favorite Edie Meeny Miny Mo ridden by Victor Espinoza could do no better than 2nd after hopping up at the start and rushing to the front. Rounding out the top three was Midnight Obsession ridden by Paco Lopez.