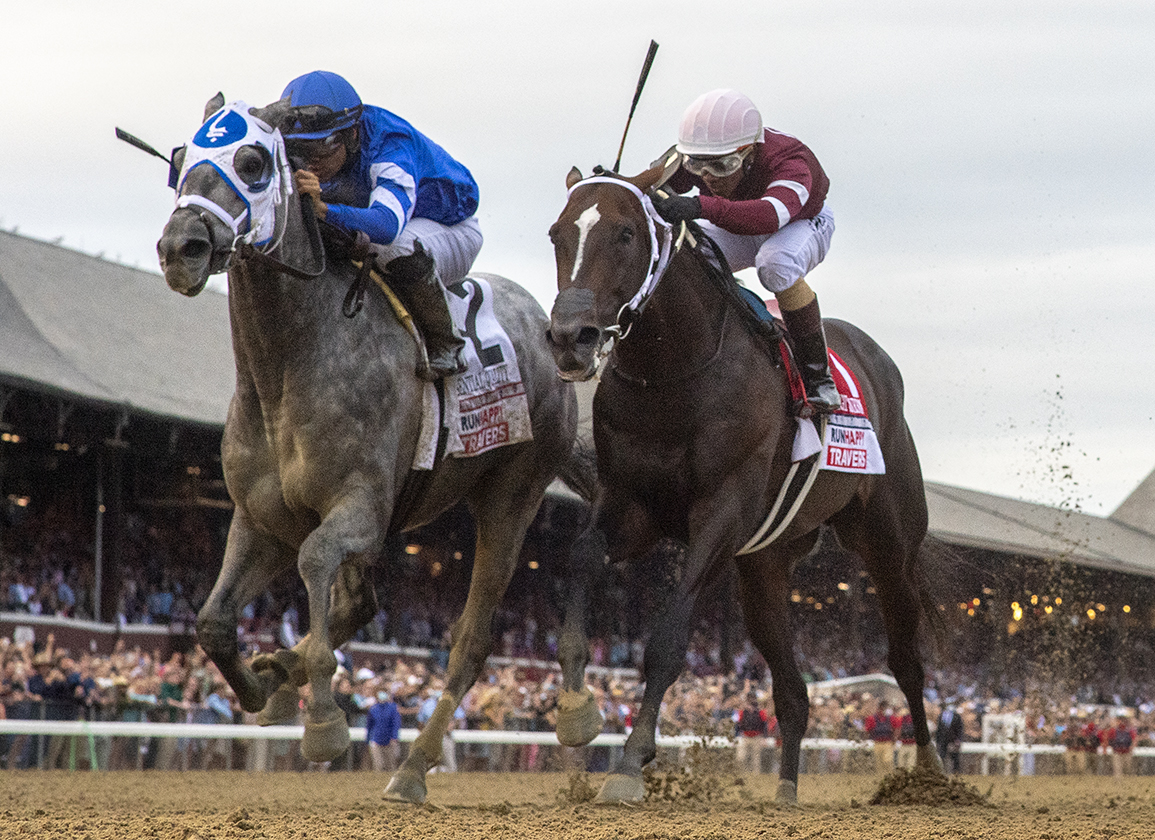 In the first handful of strides three of the bigger names in the race took up the first three positions at the small West Virginia track.

Defending champion Sleepy Eyes Todd went for the lead. Rushie came up the inside while Art Collector flanked the leader to the outside. Eventually Art Collector would secure the 2nd position while Rushie would drop to third and then 4th up the back stretch.

The race order remained largely unchanged with Sleepy Eyes Todd able to control the pace every step of the way. Art Collector continued to loom outside. In the final turn it was clear this was a two horse race and Restrainedvengence and Rushie fell well back of the top pair.

Down the lane Art Collector was able to get by Sleepy Eyes Todd comfortably for the win. The defending champ would have to settle for 2nd while Rushie resurged to get back into a distant third.

The Bill Mott trained Art Collector was once a likely favorite in the 2020 Kentucky Derby, but had struggled after being sidelined due to injury. Now in August of 2021 the horse has returned to form putting up back to back stakes wins.

The Travers Stakes saw the return of 2 year old champion and likely 3 year old champion Essential Quality. Midnight Bourbon jumped out of the gates and was hellbent on the lead. He got there unopposed and opened up on the field.

Stalking not far behind was Essential Quality and Luis Saez. Coming around the far turn, the champ did what he always does and ran down Midnight Bourbon for the victory. With the victory Essential Quality improves to a 8-1 record. The one loss coming to Medina Spirit in the Kentucky Derby.

Other Saturday Stakes from Saratoga

Saturday’s card from Saratoga was loaded with additional stakes action that added to the allure of the Travers day card.

The Bite Heard Round the World

Despite brilliant performances across the country this weekend, undoubtedly the most talked about moment was Firenze Fire savaging Yaupon in the stretch of the Grade 1 Forego Stakes. Savageing is a term in horsemanship to refer to an aggressive act toward a specific target, in this case biting.

Firenze Fire was in the lead as Yaupon tried to come up the rail. Firenze Fire turned to the charging horse and began aggressively biting at his head, forcing jockey Jose Ortiz to correct. The behavior continued for several strides. In the end Ortiz was successful in getting the horse clear, but the act had completely disrupted the forward momentum of the horse who was unable to maintain 1st position and ended up 2nd.

While the event is rare in racing, many were quick to point out on social media that Firenze Fire himself had suffered a similar though less egregious savageing at Parx during his racing career.

Retirement of a Fan Favorite

Whitmore, the hard knocking horse who had run in so many big races, had become quite the fan favorite for his consistent running, but also his unique personality. After finishing the race, jockey Joel Rosario quickly pulled the horse up and he was vanned off.

The horse’s trainer Ron Moquett announced shortly thereafter that Whitmore was to be retired from racing.

The top two choices in the race were two of the most brilliant speed horses in the country today. Life is Good hit the front off a long layoff ahead of Jackie’s Warrior. In the middle part of the race he was able to pull away to a clear advantage.

Jockey Mike Smith made the decision to keep the horse in a straight path around the turn leaving him well off the rail. The gap was more than enough for Jackie’s Warrior to surge through on the inside. Life is Good fought on gamely, but couldn’t hold off the Asmussen trainee.

Since the Bob Baffert ban in New York was lifted by the courts, he has had a relatively small presence at Saratoga. However, he brought in a real monster to the Grade 1 Ballerina. The ultra impressive Gamine would win comfortably under the veteran handling of Johnny Velazquez.

Lake Avenue would run on for 2nd with Ce Ce finishing third. Outside of a loss in the 2020 Kentucky Oaks, Gamine remains undefeated and is a clear favorite in the older female sprint division.

Predictable Channel Maker and Tribhuvan went out for the lead in the mile and ½ turf race. As is typical in turf racing things remained largely unchanged throughout a large stretch of the race.

Halfway up the back stretch Joel Rosario started to take Gufo from last up the rail to close ground on the leaders. Luis Saez on Cross Border made a similar move while losing ground.

As the horses entered the stretch Gufo had found a perfect seam and jumped outside of the two leaders who were badly tiring. The Clement trainee galloped home ahead of a late charging Japan. The runner up was more forwardly placed early, but waited to make a move on the leaders which gave Gufo the advantage of momentum and an easier trip.

Cross Border would continue on with his move to get up for third.

The Shared Belief from Del Mar marked the return of the 2021 Kentucky Derby winner, Medina Spirit. The Kentucky stewards have not yet conducted a hearing to establish if the horse will be officially disqualified from the “Run for the Roses”. The horse was unseen since running 4th in the Preakness. Another 2021 Derby runner joined him in the gate with Rock Your World taking up 2nd choice in the betting market.

In the end Medina Spirit would outlast Rock Your World and the rest of the field to win. Most impressively the horse appeared to be headed entering the stretch before reengaging and taking down the stakes race by a comfortable margin.