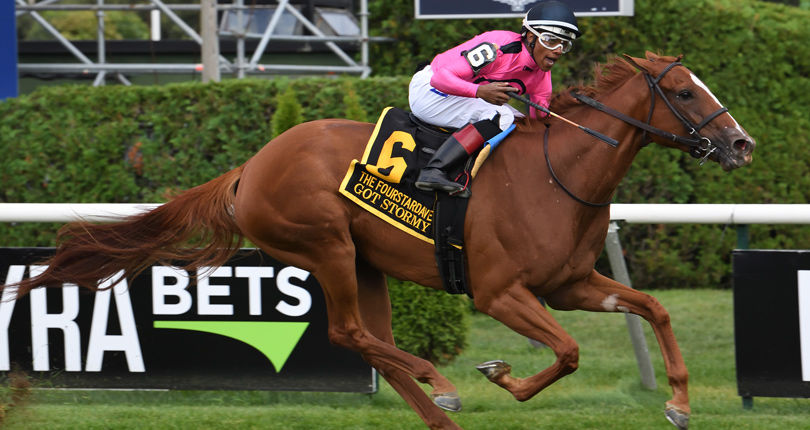 Sunday, June 20 marks the 36th running of the Grade 3 Poker Stakes. The race is run at one mile on the turf for 4 year olds and up. The race is likely to draw turf routers from the top turf barns in the country.

The race is named after a prolific sire who raced in New York in the 1960’s. Poker’s lineage would go on to produce several phenomenal race horses including 1997 Kentucky Derby winner Silver Charm and Triple Crown winning Seattle Slew.

The event has qualified for graded status since 1988 and has maintained that status ever since.

In 2018 Oscar Performance ran the race in 1:31.23 which is the course record, but also stands tied for the fastest mile turf performance anywhere in the country.

Several active connections have won the race multiple times. Some of these human connections will have a chance to add to their totals this year. Juddmonte Farms has 2 victories in the race and has probable Flavius in this year’s event.

Active jockey Jose Lezcano has 4 victories in the event. He does not have a mount currently listed for the event, but both Kendrick Carmouche and Joe Bravo are the regular riders on two probable entries which could give him a chance to pick one up late.

New York turf racing is often a hotbed for the best turf runners in the country. There is no doubt that this has a lot to do with some of the top turf jockeys and trainers being stationed in New York throughout the summer including the potent team of Chad Brown and Irad Ortiz Jr.

One common characteristic of turf racing across the country is that it tends to be slower early and then all of the horses come charging late. This unique run style can be seen very prominently in New York turf racing. Occasionally this can lead to big upsets if a long shot decides to set a quicker pace and gets the lone lead.

Daily Horse Picks speed and pace bias tool suggest that upon analysis of 159 turf races at a mile distance horses with speed designations of “Fast” or “Fastest” win over 70% of the races.

The pace bias tool provides a little less clarity. Horses labelled “Closers” have won the greatest percentage of races winning at a 28% clip. Interestingly enough the 1 mile distance provides an anomaly in the second spot with 23% of horses winning with a pace designation of “Leaders”. Rounding out the top 3 pace designations are the “Stalkers” who win 21% of all contestes at this distance.