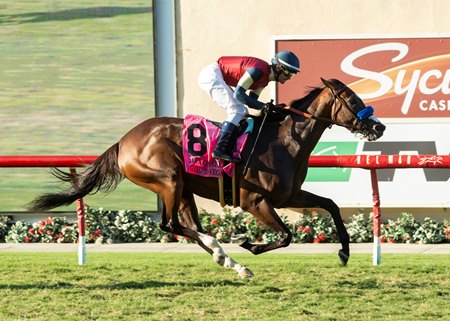 As 2 of the premier meets of the summer wind down, Bob Baffert unleashed a monster at Del Mar on Saturday in a maiden special weight race.

The Grade 1 Jockey Club Gold Cup was won by Max Player on Saturday. Ridden by Ricardo Santana Jr. and trained by all-time leader trainer Steve Asmussen, the horse found his way to the winner's circle. Finishing in second was Happy Saver for Todd Pletcher. Rounding out the trifecta was Forza Di Oro under the ride of Junior Alvarado for trainer Bill Mott.

The winning horse out of Honor Code paid $9.60 on a $2 win wager and earned a 102 Beyer Speed Figure for the effort.

War Like Goddess has been a roll lately and continued in the Grade 1 Flower Bowl on Saratoga’s inner turf course. The Bill Mott trainee earned a 100 Beyer Speed Figure while paying out $2.80 on a $2 win wager. The heavily favored horse held off a pair of Chad Brown runners for the win.

Great Island and My Sister Nat finished 2nd and 3rd respectively in the Grade 1 turf event.

Public Sector for Chad Brown won the Grade 3 turf event over Never Surprised for Todd Pletcher. Rounding out the top 3 was the Wesley Ward trainee Like The King. Public Sector earned an 89 Beyer Speed Figure for the effort.

With the Saratoga meet heading into the final card on Labor Day, the jockey, trainer, and owner standings are starting to crystallize.

In the trainer standings Mike Maker got off to a blazing start, but cooled off during the 2nd half of the meet. He now finds himself in third with 24 wins. At the top of the standings is Chad Brown who does extremely well at this meet every year because of the extensive turf racing schedule at the NYRA track. Brown will be named winning trainer as he sits more than 10 wins to the good of 2nd place Todd Pletcher.

The jockey once known as “Jersey Joe” may have to change his moniker to “Bayside Bravo”. The rider moved his tack from New Jersey to California earlier this year and has made his mark on the southern California circuit. On Saturday he took down the Del Mar Derby with None Above the Law rewarding backers with a $23 win mutuel.

Finishing in 2nd was the #14 Flashiest. #3 Hockey Dad for Doug O’Neill finished third. All three of the top finishers earned modest Beyer Speed Figures in the mid 80’s

Richard Baltas had a good day Saturday finishing first and third in the Grade 2 John C. Mabee. Flavien Prat rode Going to Vegas across the wire first while stablemate Bodhicitta finished 3rd. Between the Baltas runners was Dogtag for Richard Mandella with Umberto Rispoli aboard. The winner of the race was credited with an impressive 96 Beyer Speed Figure.

Perhaps the most talked about performance of the weekend didn’t occur in a stakes race. A maiden special weight debut colt stole the show instead. The Bob Baffert trained Corniche earned a sizzling 98 Beyer Speed Figure on Saturday under the handling of Mike Smith. Prior to the race the fastest recorded 2 year old figure was a 93.

Baffert always seems to have plenty of Derby contenders, but this one is definitely on people’s early Derby prospect list.

Although 5 jockeys have over 20 wins at the Del Mar summer meet, the winning jockey at meet’s end will be California staple Flavien Prat who entering Sunday was the only jockey to have 40 wins. The next closest jockey is Juan Hernandez who entered Sunday with 30 victories. Other jockeys in the top 5 include Abel Cedillo, Umberto Rispoli, and Joe Bravo.

Peter Miller will end the meet as the leading trainer. Entering Sunday’s card he had a 7 win lead over both John Saddler and Bob Baffert. Baffert is tied for 2nd after a quiet summer following the positive drug test for Medina Spirit following the Kentucky Derby. Interesting enough, Baffert will likely end the meet with the highest win percentage amongst trainers with at least 50 starters. His current 27% win percentage is 10 points higher than Miller’s. In comparison Baffert has started 59 runners while Miller has started over 130.

The owner standings are wide open heading into the final days of the meet. Hronis Racing LLC has 8 wins to their name and over $1,000,000 in purses to their names. However, there are 5 stables with 5 or more wins at the meet. Nicolas Alexander, Reddam Racing LLC, Red Baron’s Barn LLC and Rancho Temescal LLC, Downstream Racing LLC, and Gary Barber all are within striking range as a couple of victories for any of these owners could elevate them to the top of the standings.