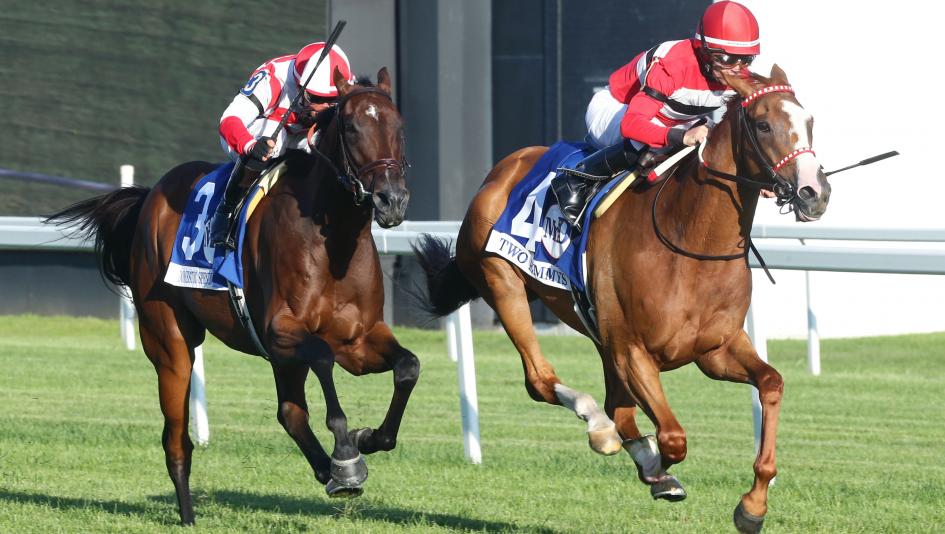 As fans prepare to say farewell to Arlington Park in September, the track provided plenty of action and excitement for what will likely be the final Arlington Million day from Arlington Heights.

Race favorite Shantisara lived up to the billing for Chad Brown. After settling toward the back of the field early, the horse showed a remarkable closing kick blowing past all rivals improving four positions in the final two calls of the race to win easily. Oyster Box for H. Graham Motion and Flown for Brendan Walsh rounded out the trifecta.

Mean Mary lost most of her chance pre race when she broke through the gate before the start of the race. After being reloaded she broke well and took her customary position at the front of the field. Remarkably despite expending energy before the break, she was able to hold on late for 2nd.

Beating her to the wire was Belmont Oaks winner Santa Barbara for Aiden O’Brien and Ryan Moore who got a much easier trip this go around. Rounding out the top 3 was Lemista for Chad Brown.

Score this race for the public who correctly bet the top 3 choices in order in the win pool.

Luis Saez may be riding better than any jockey in the country and he was rewarded with a big victory in the Bruce D. Stakes on Saturday. Saratoga’s leading rider found himself in Illinois and rode Point Me By to an easy victory as the favorite.

While many of the races at Arlington Park saw formful finishes, the headlining event formerly known as the Arlington Million was the big shock of the day. The Mister D. Stakes saw an odds on favorite in Domestic Spending for Klaravich Stables and Chad Brown.

Longshot Two Emmys went off at 27-1 and broke out for the lead. Uncontested, the horse doddled along running a pedestrian 26+ seconds for both the first and second quarter. With the slow pace early, James Graham had just enough horse underneath him in the stretch to run the horse across the wire in first.

Domestic Spending was a late charging 2nd after sitting uncovered in the 2nd flight throughout the race. Had the race been any longer, the favorite would have likely won as he continued to gobble up ground to the wire. The visual of the end of the race prompted many bettors to take to social media to criticize jockey Flavien Prat for waiting too long to ask the horse for his best.

Completing the trifecta was Mike Maker’s Glynn County. Maker has been hot of late and is the leading trainer at Saratoga right now.

The Saratoga Special was contested at 6 furlongs on the fast main track. Gunite for Steve Asmussen broke the latch first and was inside of post time favorite Dr. Jeff. Also contesting for the lead out of the gates was Nakatomi, who quickly dropped back into a stalking position. Also in that tightly bunched second flight was High Oak.

At the 4 furlong mark the horses remained tightly bunched. Dr. Jeff had taken the lead, but only slightly. Entering the stretch the race favorite came up empty and began to retreat. He would  finish 5th. Meanwhile Gunite had taken the lead back and looked strong, but his late kick was nothing compared to that of High Oak under Junior Alvarado.

The Mott-trained colt had been lying in wait all the way around the course, tipped out, and won going away. The final margin of victory was 4.25 lengths. Gunite held on for an easy 2nd and Nakatomi was well clear of the fourth place finisher, Double Thunder. Double Thunder was the only horse of consequence that made up any ground during the running of the race.

All the money was on Raging Bull for the powerful team of Peter Brandt, Chad Brown, and Irad Ortiz Jr. The favorite went off at even money. The other Chad Brown, Blowout made an early push from the gates and settled in on the lead followed by Whisper Not and Got Stormy.

The rest of the field settled well off the pace including Set Piece and Casa Creed who were more than 7 lengths off the leader. Positions remained unchanged up the backstretch and horses closed in on the early pace setter.

As the runners entered the stretch the real running began and the old race mare, Got Stormy found her old form. She blitzed the field home by a length and a half to capture her 2nd career victory in the Grade 1 Fourstardave. Set Piece and Casa Creed continued their prolonged kicks to get up for 2nd and 3rd respectively.

As is customary in these turf route races, the finish was extremely competitive. The second through seventh place finishers were separated by less than 3 lengths.